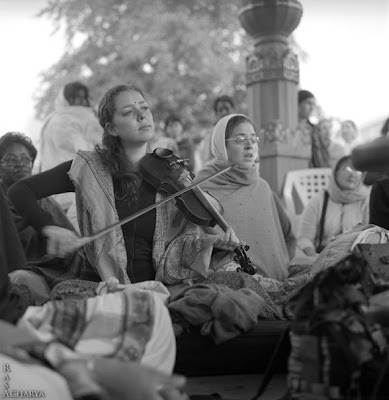 Nearly a decade after the success of their debut CD ‘Nectar of Devotion’, Gaura Vani and As Kindred Spirits have released a new album of kirtan and devotional songs, entitled ‘Ten Million Moons’.

The album presents kirtan through a variety of musical styles, from the traditional mridanga and karatal arrangements on ‘Bhaja Gauranga’, to the bassline driven beats on ‘Stop and Talk (Hey Natha)’. Instruments and vocals that span cultures are richly layered throughout, giving a sound that is both timeless, and refreshingly modern. This is particularly so on the energetic opener ‘My Body Is A Temple’, and the moving, strings driven ‘Moods of Kirtan’. There are some unexpected surprises too, such as the gospel choir and Hammond organ on ‘Sleeping Soul (Jiv Jago), which work surprisingly well!

Listening to the CD, it becomes clear that these are more than just musicians. Most of the performers on the album, like vocalist Acyuta Gopi, and multi-instrumentalist Vishvambhara, have lived and breathed kirtan since the day they were born, and the devotional moods they express are tangible and sincere. Combined with their natural musical talent, this makes for vibrant and inspiring listening. Gaura Vani and As Kindred Spirits aim to inundate the world with the sound of kirtan, and if their current success is anything to go by, they are well on their way.

I always love Gaura Vani's dedicaiton to sharing kirtan with as many peple as possible. His website has many links to live kirtan tapes and photos.

I also really feel that he lives the kirtan rather than just performing it.

Welcome, and Next Kirtan

This blog is about kirtan - an ancient form of musical meditation from northern India. It stems from the bhakti-tradition, or devotional tradition, is performed in a call-and-response style, and is both easy and sublime.